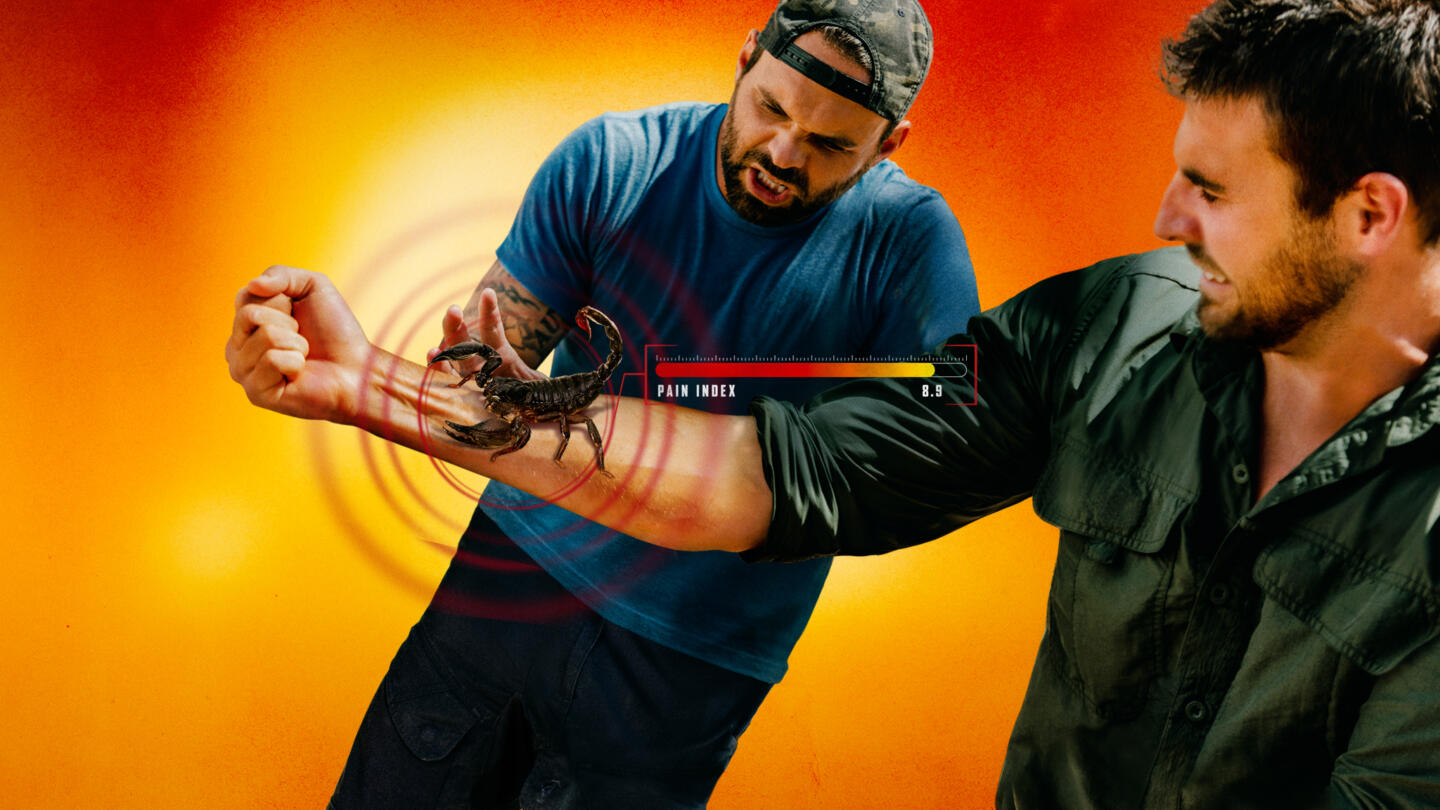 “Kings of Pain” follows wildlife biologist Adam Thorn and professional animal handler Rob “Caveman” Alleva as they get bitten and stung by some of the most dangerous animals and vicious stinging insects in the world – from a reticulated python to a rove beetle – to create a complete and comprehensive pain index that will ultimately help save lives.

In 1983 entomologist Dr. Justin O. Schmidt began ranking stinging insects on a scale from 1-4, putting himself in harm’s way for science creating the Schmidt sting pain index and authoring the book The Sting of The Wild. Now Thorn and Alleva are taking Schmidt’s pain index even further adding venomous bites and more deadly creatures and ranking them on a 30-point scale with new categories including intensity, duration and damage. Their goal is to create history’s ultimate and fully comprehensive guide to measuring pain. In addition, they will be consulting with Schmidt as they build this new pain index that is completely new to science to be used as an educational tool showcasing which creatures humans should avoid and what to do in the event they do get bitten or stung.

Each episode will chronicle Thorn and Alleva as they track the animal in its natural habitat, safely trap it and then execute the bite or sting on each other, followed by their ranking of the pain results. An onsite medic is present who monitors the health and well-being of both men and describes to viewers exactly what physical and physiological effects each bite and/or sting is creating within their bodies. Along their journey, viewers will also be learning about the history of each animal featured and its often-uncomfortable relationship with humans. Deadly wildlife featured over this eight-episode season include the Nile monitor lizard, executioner wasp, fire urchin, rove beetle, lionfish, scorpion fish, bullet ant, piranha, tarantula hawk, giant Asian centipede and the reticulated python – to name a few. Audiences will also get the chance to travel the world from the remote jungles of Bolivia, the Amazon and Indonesia to the beaches of Bali, South Africa, Mexico and Baja California.

Meet the Biting, Stinging Creatures of ‘Kings of Pain’

The Torturous History of Trying to Measure Pain

Bugs of War: How Insects Have Been Weaponized Throughout History

Watch: The Best Bites and Stings

Kings of Pain: Behind the Bites and Stings with Executive Producer Dave Carr